SUPERSETS AND COMPOUND SETS
“Perform 20 Sumo Squats and 20 Mountain Climbers in a superset.”

WHY CALL THEM SUPERSETS?

Most fitness enthusiasts would get this immediately, but for others they usually ask “What’s a superset?” In this article I will be discussing Circuit Sets and their popular variations. It’s more important now to understand this terminology since many people are using online coaching. This will make it easier for clients to comprehend a workout program when technical annotation is used. A superset is just two any exercises performed back-to-back without a rest in between. In general, that is all. Why are supersets called supersets though? I Googled it, and couldn’t find the name inventor of “SuperSets” so it got me thinking what does it mean? Superior sets? Superlative Sets? Neither of those really fit. Some people claim Arnold Scharzenegger is responsible for mainstreaming the word. Anyway, let’s use the word Circuit Set instead, I explain in detail why as you read on.

First, all of these shouldn’t be compared to one another. You can have all three within a set. An example: Double Circuit Set of Burpees and Mountain Climbers at a duration of 30 second intervals. There you go. Let’s start by defining Interval and H.I.I.T, then I will elaborate on Circuit Sets.

The fitness definition is somewhat deviated from the dictionary definition. In workouts, an interval can mean a duration period or a rest period. But you could use the word interval when there are multiple exercises or sets within the exercise. It is more commonly used as rest intervals as well.
Video: Kiara Gesensway
Example of a H.I.I.T Routine. The routine follows the guidelines of a TABATA. 4 minutes routine, 4 exercise 20 seconds each, 10 second rest interval, 2 sets. The term High Intensity Interval Training is usually intertwined with the Tabata routine named after Izumi Tabata.(Tabata, N.D.)

1. Escalate your heart rate to approximately 70 to 90% BPM of your max within a short period.

2. Then rest for only short bouts so your heart rate remains fairly moderate to high at approximately 60% BPM.

During the routine, your lungs won’t recover fully to resting state. Every coach has their own preferences on creating a HIIT routine; Burpees, Squats, Box Jump and anything that can rapidly increase your heart rate within a short period. In my opinion it doesn’t matter what exercises are used as long as they increase your heart rate quickly and you follow the heart rate requirements, you are performing HIIT.

Normally a superset is recognized by two exercises back-to-back without resting in between right? But what if I decide to perform three exercises back-to-back, do we still call that a superset? This is why I would like to abolish the word. We need better phrases so we can distinguish variations from each other. A superset is just one variation of a Circuit Set. A Circuit Set are two or more exercises performed back-to-back without a rest. Circuit Training is considered one long Circuit Set. We can break down each variation this way:

Now we can describe the type of movements involved in the set. Lastly, we can combine them together to create a compound phrase:
Example: Double Regular Set (SuperSet) Side Lunge with Arm Curls then Mountain Climbers. No resting in between the both. 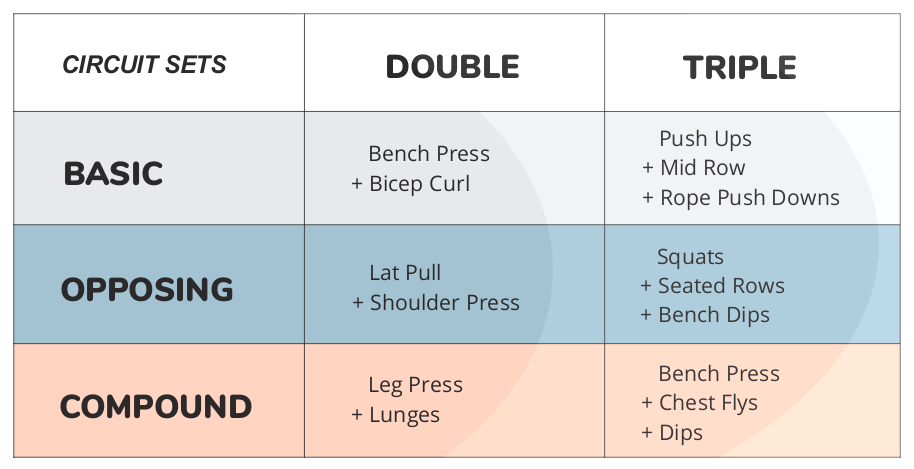 Photo: © Web Wizzy, Inc.
Too technical? You can always ask your coach to explain these in different terms. But this annotation style is useful for training a competitive athlete or bodybuilder, where programs are more sophisticated. As clients advance into their training, more dissecting, fine tuning and annotation is needed to break the barriers into the next level. fatigue.

Do I need to perform circuit sets? For most endurance athletes the answer is yes you should. Improving lung capacity in correlation with oxygen recovery is practically a requirement for every endurance athlete. For strength development and many other sports such as bodybuilding, weightlifting and powerlifting, integrating circuits are not a mandatory thing but they certainly can help with performance.

Double Circuit Sets benefits
Ideal for trying to expend more calories within a shorter period. When two exercises are performed back-to-back, your heart rate will be escalated for a longer period. This assists with burning fat.

Triple Circuit Sets benefits
Ideal for athletes who have progressed in their VO2 (UC Davis. n.d.) Recovery. Use triple sets if you want to produce more lifting volume within the workout. If programmed correctly, almost the entire body will be conditioned. Hitting triples and quadruple circuits may improve endurance conditioning for obstacle courses. 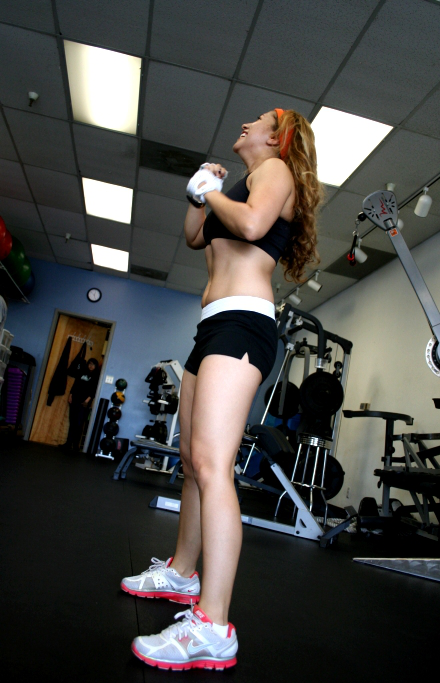 WHAT ARE COMPOUND MOVEMENTS?

A compound movement is any exercise which involves more than one muscle joint. Examples are a Push Up, Squat and Lat Pull Down. A push up requires two joints bending at the shoulder and the arm. Bicep curls, tricep push downs and chest flys are not compound movements because only one joint is involved during the prime movement. Other muscles may be involved in stabilization but are not involved as prime movers.

Some coaches may never go to this extreme but just for fun here’s an example of an “All Compound Movement, Triple Compound Circuit Set.”

Squats to Deadlifts to Leg Press

COMPOUND CIRCUITS NOT IDEAL FOR EVERYONE

Implementing compounds sets are suggested only for advance clients such as Physique competitors in the final cutting stage. This level of program design is not for everyone because of a few instigating factors.

It is important to choose loads appropriately so your client can actually finish the circuit. Compound circuit sets involve the same muscles, so a poorly designed set may lead to excessive lactic acid build up. While the burning sensation during exercise are considered good, this can lead to muscle cramping and possible injury such as tears. As a coach, most of the time I will try to perform my own created circuit myself to assure I don’t place my clients at risk.

OPPOSING MUSCLE SETS CAN BE CONTROVERSIAL

Supersets is known to be the brain child of Arnold Scharzenegger. In his book New Encyclopedia of modern bodybuilding. (Schwarzenegger, 1985) He mentions supersets as part of his technique to get the blood flowing in the related muscle joints. While one muscle group is working, the opposing group is relaxing. His favorite routines are actually sequenced as opposing muscle supersets.

When the prime mover (agonist) muscle contracts, the opposing muscle (agonist) usually relaxes. There are some exercises which require both muscles to be engaged and fire up simultaneously for stabilization. An example is the Deadlift. While the hips extend, quadriceps shorten but hamstrings become stabilizers. This process is called Reciprocal Inhibition. (Dan Med Bull, 1993) Although you may not get this double contraction in circuit sets, training opposing muscles back-to-back may have a similar effect. As you train the antagonist (opposing muscle) the agonist is still tense and trying to contract. This is a controversial topic but should be addressed as a precaution. 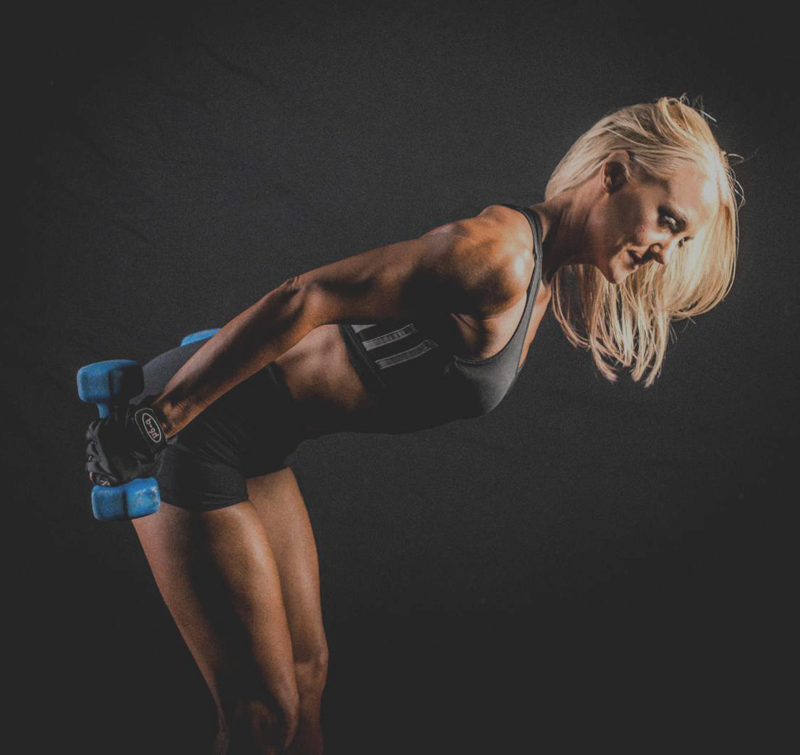 Utilizing Circuit Sets are very useful. Whether it’s a double, triple, opposing or compound circuit, there are many various combinations available. Coaches can apply them to client workouts to boost caloric expenditure within the workout or to improve muscle endurance and stamina. It’s important not to over design a circuit with too many repetitions within the same muscle group or it may lead to excessive lactic acid build up. High Intensity Interval Training is a form of circuit sets where intervals are usually short escalating the heart rate above 70 percent bpm. 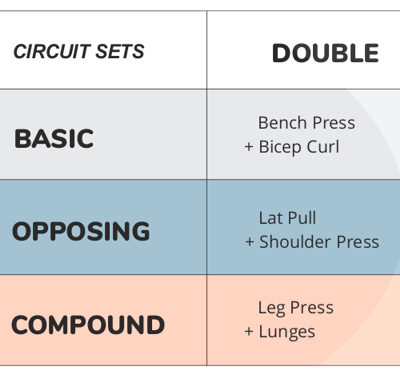